**Due to a technical glitch on my phone, this did not publish properly last night. Let’s try this again!

Have you ever experienced that moment when you knew you should keep your mouth shut and didn’t? Yah, me neither. It most often happens with my kids but there have been times I’d really rather crawl in a hole after I’ve blurted before thinking, kids or otherwise.

One of my most painful moments was a comment made to my cousin years ago that took another several years after that for me to forgive myself. We hardly ever see each other, but when we sat together at dinner following our Grandma’s funeral, we discussed it and she told me to give it up already. She had forgiven me soon after it happened, so wondered why the heck I was carrying it inside all this time. She literally laughed and shook her head in disbelief that 15 years later I was still hung up on it. You can certainly tell from that incident that I don’t want to hurt others with my words and that I don’t do well with it once I’ve opened my big trap.

It’s happened a couple times recently too, where I wish I could retract my comments but alas, once something is said it can’t be un-said. What actions do I think I could take to refrain from such idiocy? Hmmm… 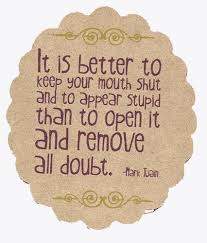 2. Bite my tongue – literally. Where do you think that saying actually came from anyway?

3. Hold my breath until I’m blue in the face. That may generate curiosity and questions but would save an undesirable outcome with my words.

4. Say ‘I love you’ instead of whatever initial stupid thing was on the tip of my tongue. Sure, it may shock some of the people, but some may know it was a better word choice in that moment!

5. Take a bite of food. Stuff whatever is available in my mouth to avoid the certainty of regret…even if it’s fish (which I vehemently dislike).

6. If it’s on the phone, disconnect. Immediately. Pretend I’m in a dead zone on my cell. Although, anyone I speak with on my cell phone may now wonder at this comment because my phone disconnects often without any help from me!

Yes, a bit of silliness but you get my point. It’s far better to inflict pain on yourself than it is to hurt others with your words, or make statements that you will later regret. When you feel like you just can’t restrain yourself, do it anyway. You will thank yourself in the long run, and you won’t be stewing with self-forgiveness for years to come.

Words are pale shadows of forgotten names. As names have power, words have power. Words can light fires in the minds of men. Words can wring tears from the hardest hearts.” ~ Patrick Rothfuss