I don’t know about you, but it’s a challenge for me sometimes to start a conversation with a new acquaintance or someone you haven’t seen in a while. You want to be the initiator but you don’t want to sound like an idiot, so then what? One of my favourite conversation pieces has become my beloved Cracked Berry. I don’t pull it out to demonstrate my addiction to it, but to get the phone – not me – noticed. Loud and proud I am! 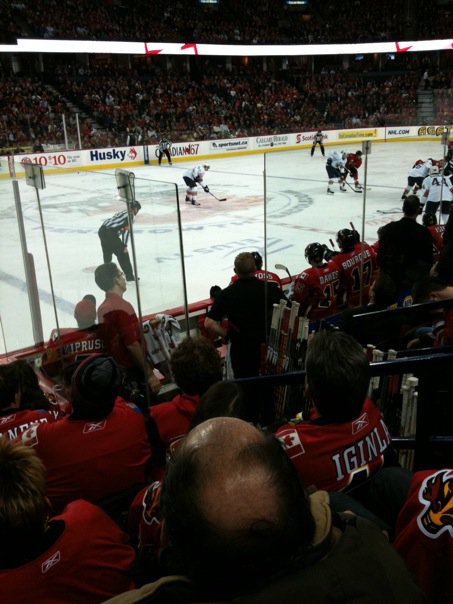 Just a little over 2 years ago I went to a Calgary Flames hockey game. Yes, I’m a hockey fan, just not a Flames fan (don’t search me out and hurt me if you’re a Calgarian!). Confession time – I’m a die-hard OILERS fan. Anyway, back to the story.

As I cheerfully heckled the mom in front of me with her little 18 month old son wearing a Flames jersey – “Go Oilers Go – Go Oilers Go!” – the BlackBerry sitting on my lap fell. It would have been fine had I been sitting further up where it’s only the cement on the floor in front of you, but 7th row posed a different result. Because those seats are so close to the ice, the first several rows are bleachers, which meant that my phone dropped all the way to the floor. Yup, it landed right behind the Flames bench. Well done Shandra. As IF they’d let me go find it, never mind its doomed state! Invariably not even the Flames security could go searching, but only the exclusive NHL security people. I didn’t feel too stupid. They ended up calling it and calling it until they heard the phone ringing to the tune of ‘Footloose’, humorous only because it was my foot/leg that sent it flying. Amazingly it still worked! Those NHL security guys then handed my Cracked Berry off to a complete stranger to give me when I returned to my seat. That actually made me laugh, security but not secure!

The only apparent damage to the phone was a triple cracked screen. I could now call it a bonafide CrackBerry. In the two years since, my phone has provided endless opportunity for great conversation, is an ice breaker in new settings, and has given many techies the opportunity to share their knowledge in how I can have it fixed. They look at me sideways when I say, “Uh uh, I’m leaving it the way it is!”

I’ve developed a strange affinity to, and connection with my Cracked Berry, and will sorely miss it when I upgrade in the Fall to the latest and greatest. Call me crazy but I’m already thinking about it!

Here’s a question to consider: “What’s in YOUR wallet – er…purse – of possibilities to create your own conversation piece?”