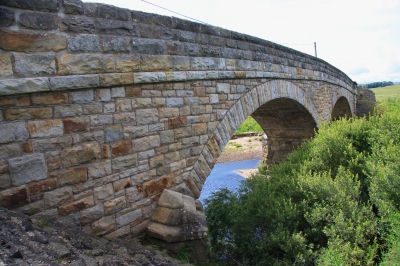 Bridges carry significant symbolism. They fill a gap, get you across an otherwise insurmountable body of water or mountain valley, get you from Point A to Point B, help you access remote locations that may not otherwise be available. Usually the daunting task of building a bridge – from conception to completion – spans several years. It takes a lot of vision, imagination, planning, collaboration, teamwork, perseverance and dedication . You have to be in it for the long haul if you’re going to build a bridge! Suffice it to say that you want to know when you get to the other side that it will all be worth it!

I remember as a kid watching cartoons where the bridge gets blown up and the train goes whistling down the canyon with a big KABOOM ! when it crashes at the bottom. Gone in an instant. Who am I kidding, I still sneak a peek at some of those retro ‘toons! Now, let’s consider if that was a real life scenario. The panic, the fear, the utter despair generated by the recognition that the end is inevitable and very, very near. The years spent building the thing take seconds to destroy.

Let’s put it in another context. What if the bridge was the only access point to your dream destination? Beyond all imagination it was you who actually threw the bomb that destroyed said bridge. What gives? Are you nuts? What sane person would wreck any chance of crossing the bridge to their dream? Sadly, it happens all the time. In a moment of selfishness or anger, years of building bridges (relationships) with others – whether at work, at home or at play – can be permanently destroyed.

I have recently experienced two different situations that again remind me how crucial our choices from day to day can become down the road. In one scenario, a bridge ‘under construction’ got abruptly blown up. No warning, disaster, and those on either side of the bridge looked at each other in wonderment at what had just happened. None of them anticipated or contributed to the demise, but it happened nonetheless. Dazed and bewildered, we each picked up our own pieces and took away those parts we could salvage, but the bridge was no longer.

As circumstances unfolded I bumped into one of the people on the other side of the bridge, who was just as dazed as I was. As we talked, it became apparent that both of us wanted to build a new bridge. We both shared our hearts about the situation, and built our own bridge, one of respect and admiration. It quieted months of unrest for me when I would reflect on the loss I experienced.

In the second scenario, 2 bridges I’ve worked diligently at building and maintaining culminated into a connection between those 2 bridges, creating the opportunity for a new business relationship to form. It was a captivating and momentous occasion for me, as I observed both parties light up and become excited about the possibilities in front of them. It also struck me that when you work hard to keep a bridge – or relationship – intact, your level of influence can be astounding. If I’d let either of those relationships slip into disrepair, none of us would have enjoyed the satisfaction of walking across a bridge that was fully intact, safe and strong.

The bridge you build today can be the path to your dream in the future.

“He that cannot forgive others breaks the bridge over which he must pass himself; for every man has need to be forgiven.” ~ Thomas Fuller