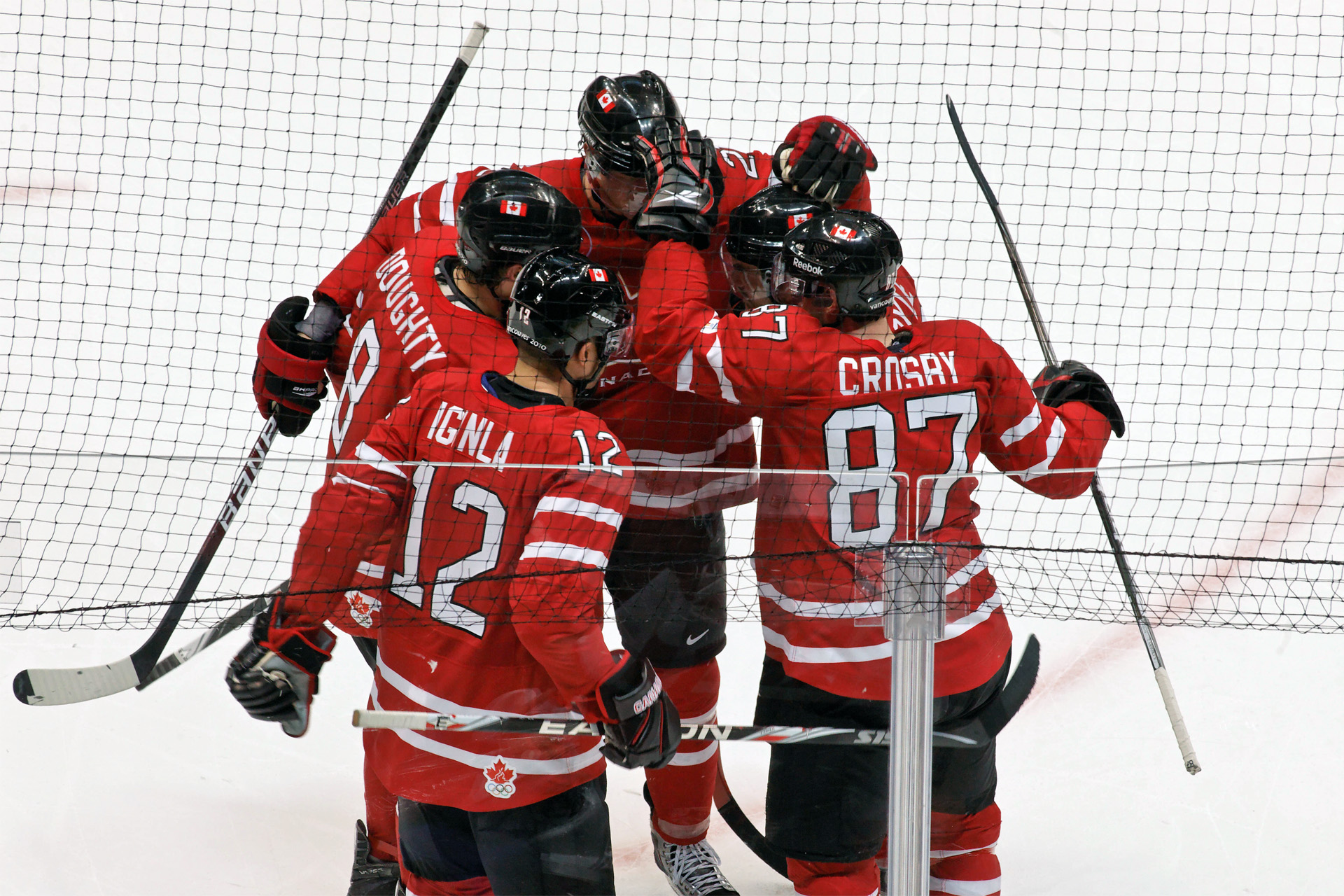 “Canada2010WinterOlympicscelebration” by s.yume – originally posted to Flickr as Canada vs. Germany. Licensed under CC BY 2.0 via Wikimedia Commons

Since the early 1950’s these are professional athletes who have committed suicide. Lives gone, families and communities disrupted, tragedy at a depth few of us know or understand. But in looking at that number, it seems all wrong to me, far too many on that roster.

The last thing I wanted to see was another name added to that list, but on September 19, 2015, Todd Ewen – former NHL forward – took his own life after a long battle with depression.

I started counting the ‘casualties’ after Steve Montador’s death in February of this year. Although there is no official cause of death recorded, he too struggled with depression, a fairly common occurrence after head trauma aka concussions or chronic traumatic encephalopathy (CTE).

My heart is broken, my stomach churns and I’ve cried tears for people I do not know. All I want right now is to wander the hockey halls, the dressing rooms, to look into the eyes of those left behind, to make sure they’re all right. They aren’t, I know that. There’s a silent lingering, a torturous unrest, a hushed world that so desperately needs to be cracked wide open.

There is so much more to these lives than the game they love, the game they play. Whether still on the ice or finding other ways to fill their days, these guys need tending to. For years the men and women we pay money to watch play – hockey or any other pro sport – literally live, eat, breathe and sleep – their sport. Coached and managed, there isn’t a lot of wiggle room to define who they are as individuals, or to figure out what they are passionate about off the ice. It is entirely ingrained that there should be no other focus, no other interests.

When I connect with former pro athletes, I see passion clouded by pain, empty eyes, lost identities. What do they identify themselves as once they’re done? Or, as Daniel Carcillo says, when the game is done with them? What then? A university degree they don’t want, often a job they don’t want in order to support their families; seeking something to fill the gaping void left in place of their jersey and stick and the only lifestyle they’ve known for a decade or two.

At least in the dressing room they have each other. On the ice, they’re a team. Alone in the quiet moments of retirement, forced or chosen, who are they? With the average age of retirement being around 35 years old, do they spend their lives saying they used to be in the NHL, an Olympian, in the NBA, what? Think about that.

Sure, there are some programs to help them transition, but something just isn’t working. There’s an underlying and unspoken expectation that because they were pro athletes and lived in the limelight that they should be fine. “Who are they to complain,” is a common thought process. Look what they’ve achieved, the fame they’ve experienced, the money they’ve made – you know the conversations that inevitably transpire, right? They should just be happy, period.

There is a lot to be said for the coaching process athletes subject themselves to. We all know that challenge, growth and change don’t very often happen on our own and the sports world certainly leads the way in acknowledging and implementing the necessity of all manner of coaches in their athletes’ performance.

So how then, do we expect these players to skate off the ice never to return and have all the tools they need to live meaningful lives, without systems and coaches in place to walk through this major transition with them? Provide a link to a program they can access (which I’ve come to understand is pretty standard)? Tell me how many of us would jump right on that and be successful at creating a new identity or sense of purpose?

Without some sort of purpose, passion, hope, or identity developed separate from sport, I fear that this disturbing trend will only increase. Whether it’s an Olympic athlete, a football player or a hockey icon, none are immune to the despair that can overtake them when experiencing a major life transition without proper supports in place.

I’m not going to try to hide the fact that I was already emotional when I read last week that Daniel Carcillo announced his retirement from the NHL so he can help his buddies, so more of them don’t fall prey to the depths of hopelessness or the throws of depression. It’s real. It’s haunting. It struck me to my core that Carcillo has chosen to leave the NHL in order to make his difference.

It’s been bugging me for a long time.

I want to enjoy my love of the game without the dread of another news headline. I want to help too. I yearn to make a difference for these men and women in transition. I want to help them in their discovery of what’s next, what’s purposeful and full of vitality for them. I want to offer a place where it’s okay not to know what’s next, confident that they will figure it out with the support of people who ‘get it’ and have the tools to walk through it with them.

Not all struggle, I know, but many do.

I’m not without my own experience when it comes to suicide. It hits as close to home as it possibly can. My step son committed suicide in May of 2014, and my own son became suicidal at the ripe old age of nine. He is now fourteen and doing well, but I am keenly aware that the struggle is real and that I need to be vigilant.

As we come to the close of Suicide Prevention Awareness Month, let’s commit to educating ourselves, being aware of potential warning signs, and not sticking our heads in the sand. Let’s have those difficult conversations, let’s not avoid this heart wrenching topic. Because in the meantime, someone’s life may be in jeopardy.

** If you or someone you know is experiencing any kind of major transition and want someone to work with, please connect with me through my website http://goo.gl/2fDvh7 or by phone 403.813.0310.